Daikin Industries, Ltd. (“Daikin”) announced today its Pledge*1 describing the grant of free access to its pledged patents in relation to applicable HVAC-R (heating, ventilation, air conditioning, and refrigeration) equipment using non-blended, single-component refrigerant HFC-32 (R-32). Providing this free access to these pledged patents without requiring a written contract with Daikin will further international adoption of HFC-32, which has a lower global warming impact than many refrigerants commonly used today.

The Kigali Amendment to the Montreal Protocol*2 was approved in October 2016 to systematically reduce the global warming impact of HFCs and became effective in 2019. The countries that ratified the amendment are now working to replace refrigerants commonly used today with those that have a lower environmental impact.

HFC-32 has many advantages that can help reduce the environmental impact of air-conditioning and heat pump equipment. HFC-32 is a non-ozone depleting refrigerant with a global warming potential (GWP) one-third*3 of that of current R-410A refrigerant. It also provides excellent system performance and is readily available. As a single-component refrigerant, it is easy to recover, recycle, and reclaim, which helps reduce the need for additional production of refrigerant. Therefore, Daikin believes HFC-32 is suitable refrigerant to reduce environmental impact in many regions.

Daikin launched the global first HFC-32 residential equipment in Japan in 2012. Since then, HFC-32 residential and commercial equipment have been offered in more than 60 countries. To facilitate the use of HFC-32 by other manufacturers, Daikin offered free access to 93 patents for emerging countries in 2011, and then expanded free access to those patents worldwide in 2015 to encourage the use of HFC-32 globally*4. Many other manufacturers are already offering HFC-32 equipment, and its demand and interest are increasing.

A listing of the pledged patents and the specific details regarding the Pledge is available at [https://www.daikin.com/patent/r32]. Once listed, a pledged patent will not be removed, and the Pledge will not be withdrawn against a party unless that party triggers Daikin’s right of defensive termination by, for example, filing a lawsuit or other legal proceeding alleging patent infringement against single-component HFC-32 equipment provided by Daikin or one of its group companies. For a full overview and explanation of the Pledge, please see above-identified website.

*1 Please see https://www.daikin.com/patent/r32 for the specific controlling terms and conditions regarding Daikin’s Pledge and the list of the pledged patents included in this pledge.

*3 GWP values based on 100-year time horizon from IPCC Forth Assessment Report (AR4).

Japan and other regions than US and Europe 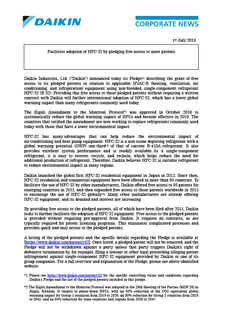